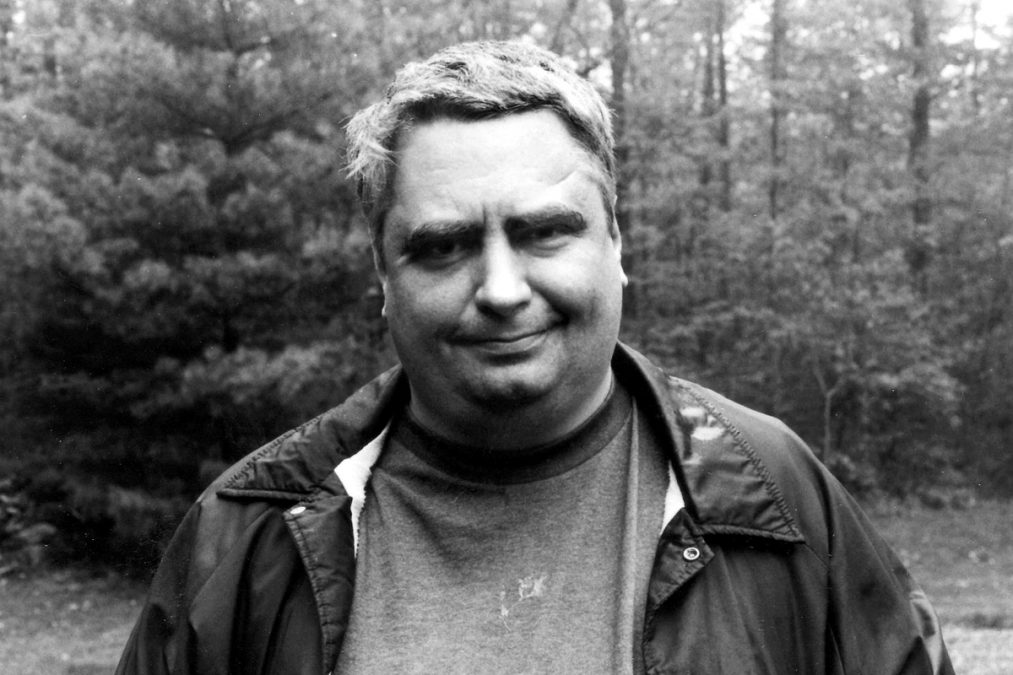 Daniel Johnston has spent the last 20 or so years exposing his heartrending tales of unrequited love, cosmic mishaps, and existential torment to an ever-growing international cult audience. Initiates, including a healthy number of discerning musicians and critics, have hailed him as an American original in the style of bluesman Robert Johnson and country legend Hank Williams. A number of artists — among them the Dead Milkmen, Yo La Tengo, the Velvet Underground’s songs. And he as collaborated with the likes of Jad Fair (a founding member of Half Japanese, who’ve also done Daniel’s songs), the Butthole Surfers, Bongwater/Shimmydisc guru Kramer, and members of Sonic Youth. Daniel gained his widest public exposure to date when, at the 1992 MTV Music Awards, Nirvana leader Kurt Cobain (who constantly touted Daniel in interviews) wore a Johnston T-shirt.

Surprisingly, the bulk of his considerable acclaim snowballed from a series of homemade, lo-fi cassettes which Daniel started recording and handing out to fans and friends alike in the early 80s. Eventually, the independent label Homestead re-issued some of these tapes on CD, and Johnston recorded a few new albums in almost-proper studios.

Daniel was born in 1961 in Sacramento, California, the youngest of five children in a Christian fundamentalist household. He and his family soon moved to New Cumberland, West Virginia, where his father, an engineer and World War II fighter pilot, landed a job with Quaker State. Drawing for a long time before he took up music, Daniel grew to appreciate such artists John Lennon, Yoko Ono, Bob Dylan, David Bromberg, Queen, Neil Young, the Sex Pistols, and especially The Beatles. „When I was 19, I wanted to be The Beatles. I was disappointed when I found out I couldn’t sing.“ That Liverpudlian quartet continues to inspire Daniel today, who sings, „My heart looked to art and I found The Beatles / Oh God I was and am a true disciple on Rock ’n‘ roll/EGA.“

While it would be years before Daniel committed his first songs to tape, he began composing at an early age. „When I was a kid, probably nine, I used to bang around on the piano, making up horror movie themes. When I got a bit older, I’d be mowing my lawn and I’d make up songs and sing them. No one could hear me ‚cause of the lawn mower.“ As a teenager, Daniel and his friends began to record their own tapes and trade them among themselves. After high school, he attended an art program at a branch of Kent State near his family’s home. This was a prolific period of his life. Unemployed, and attending classes sporadically, he began to spend most of his time in his family’s cellar, writing and recording. The tapes he made there included „Songs of Pain“ and „More Songs of Pain,“ which both centered around his unrequited love for a woman named Laurie who ended up marrying an undertaker.

The aspiring cartoonist — whose playful, symbol-heavy sketches have graced the covers of may of his releases, including „Fun“ — moved to Texas in 1983. First he went to Houston, living with his brother and working at Astro World, while also recording the seminal tapes „Yip/Jump Music“ and „Hi, How Are You?“ on a $59.00 Sanyo mono boom box. These recordings featured such classics as „Speeding Motorcycle,“ „Sorry Entertainer,“ and odes to everyone from „Casper the Friendly Ghost“ and „King Kong“ to „The Beatles.“ From there he moved to San Marcos, TX, and even joined a traveling carnival show for a spell, selling corndogs. „It was like a movie all the time. Everybody around me was a great story that never stopped, and for the first time, I realized how much freedom you have to do what you want.“

Throughout his career, Daniel’s songs and drawings have been informed to some degree by his ongoing struggle with manic depression — lending an added poignancy to his soul-searching times. His five-month stint with the carney left him in Austin, where he decided to stay. In the midst of that city’s mid-eighties music scene, Johnston was a definite iconoclast. While he continued to hand out his tapes for free, Austin record stores started selling them; in fact, the became best-selling local releases. Soon, a camera crew from MTV’s seminal „Cutting Edge“ show came to town and all the Austin bands suggested they feature Daniel.

Featured Audio: True Love Will Find You In The End (Live)